Sell or let your property Contact usTestimonialsNewsThe teamAbout us 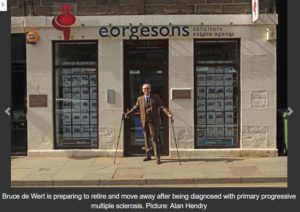 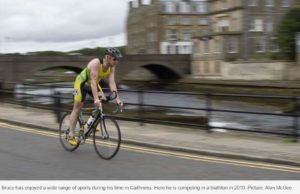 Bruce de Wert will be stepping down from his position as senior partner at Georgesons at the end of June.
For 37 years, solicitor Bruce de Wert has been a familiar figure in and around Wick – whether in a smart business suit or, in his spare time, in cycling gear or a variety of other sports kit. But now he is preparing to say a reluctant farewell to his busy job and active lifestyle, and to Caithness itself, as a result of a disease that is robbing him of his mobility.

Bruce (66) has been diagnosed with primary progressive multiple sclerosis (PPMS) and will retire from his position as senior partner at Georgesons at the end of next month. He and his wife Collette will move to Glasgow to be closer to their two daughters and four grandchildren.

While sad to be stepping down from the long-established law firm and to be leaving the county, Bruce is refusing to feel sorry for himself. “Life owes you nothing,” he said. “I’ve had a wonderful life, and you know what? It’s going to carry on for a while.

“Okay, inevitably I will be in a wheelchair. Inevitably I won’t be able to drive. It’s going to happen. I can’t do anything about it. But you accept these things and you get on with it, because life is like that.”

Originally from Oxford, Bruce studied at Strathclyde University and worked in Glasgow and Edinburgh before moving to Wick in 1984 as a court solicitor.

In Wick he quickly became accustomed to the unpredictable behaviour of a certain maverick individual on the bench. Sheriff Ewen Stewart was destined in 1992 to become the first sheriff in 15 years to be sacked, following an investigation by two senior judges who ruled that he was unfit for office.

“As a young lawyer you never knew what to expect from him, and his decisions were bizarre,” Bruce recalled. “You didn’t know, when you went in the door, what you were going to face.

“When a new sheriff principal was appointed, I went to see him and I talked to him about the bizarre nature of my dealings with the sheriff. And he said ‘we all have difficult sheriffs to deal with’, so basically he did not take on board what I had to say.

“Ewen Stewart would find people guilty but make the punishment very, very light so there was no point in them appealing. I felt very sad for those people because they were not getting justice. I also felt very sad for his wife when he was ruined, as she was lovely.”

Bruce stopped doing court work soon after becoming sole partner in Georgesons, following the death of one partner and the retiral of another.

“All of a sudden I was the owner,” he said. “I got no advice about how to run a business and they don’t teach you business at law school. You have to work it out for yourself.”

When Bruce retires at the end of June, Declan McGinley will become sole owner of Georgesons. “Declan is a very keen solicitor – he is very easy to get on with and talk to,” Bruce said. “The staff like him, as do my clients. He will be a good guardian of Georgesons.”

The firm is more than 130 years old, having been founded in 1887, and there is also a branch in Tain.

Bruce was among the online pioneers at a time when many businesses were still tentatively finding their way around the internet. “Mine was, I believe, the second estate agency online in Scotland and I think the first to do videos,” he said.

“The whole of estate agency has changed immensely and that is something that Karen will have to get her teeth into.”

Bruce also has online services that provide quick and inexpensive wills and powers of attorney (MyScottishWill and MyScottishAttorney), the only ones of their kind in Scotland. During the first Covid-19 lockdown last spring he saw a surge in demand for these, notably among health professionals.

Speaking at that time, he said: “If there has been anything positive about the virus, it is that it has encouraged us to stop ignoring the inevitable… Perhaps we are more focused on not wanting to leave behind a mess for our family to sort out.”

Bruce plans to continue operating these services after he leaves Georgesons and relocates. “At the beginning of the pandemic all of a sudden doctors were making their wills and powers of attorney on my websites,” he explained. “It’s something I can still do.”

He added: “The thing that has given me the most pleasure as a solicitor is helping people. That gives me great joy.”

Bruce has enjoyed a wide range of sports during his time in Caithness. Here he is competing in a triathlon in 2010.

Away from his working life, Bruce has enjoyed cycling, running, swimming, squash, tennis, windsurfing, boating and flying. “I have kept myself very fit all these years and it’s not that long ago I was doing triathlon,” he said, praising the “wonderful” sporting opportunities available in Caithness. “I played a bit of squash down in Glasgow and it was nothing like as organised as up here,” he said.

Now he describes himself as feeling “wobbly” and accepts that his condition will deteriorate. PPMS is said to affect about 10 to 15 per cent of people diagnosed with MS. The name reflects the fact that from the first symptoms it is progressive: symptoms gradually get worse over time rather than appearing as sudden relapses, according to the national charity the MS Society.

“It’s real life. This is what life is like,” Bruce said. “There is treatment that is aimed at stopping PPMS in its tracks but the NHS, in its wisdom, considers that I am not a suitable applicant.

“So I must take other steps. This means that I must sell up and go and live near my children because, sooner rather than later, I will not be able to drive and my wife doesn’t drive.

“I will need a house which is on the flat, probably a bungalow, because I suspect I will be in a wheelchair shortly.”

Bruce will look back fondly on his time as part of the Caithness community.

“I got a very nice card recently which said ‘thank you for being who you are’. It was lovely. It almost made me cry,” he said.

“I just love Caithness, I really do. And it has been very good to me. The north has been great to me. I’ve loved my time here. As a lawyer, you really couldn’t ask for better.”

As local solicitors since 1887, we have huge experience both of the north of Scotland property market and the knowhow to guide you through the whole process of selling your home.

With our unrivalled experience we can support you in letting your property. Check out our detailed information which explains all of the important factors you will need to consider before becoming a landlord or feel free to get in touch for face to face advice.